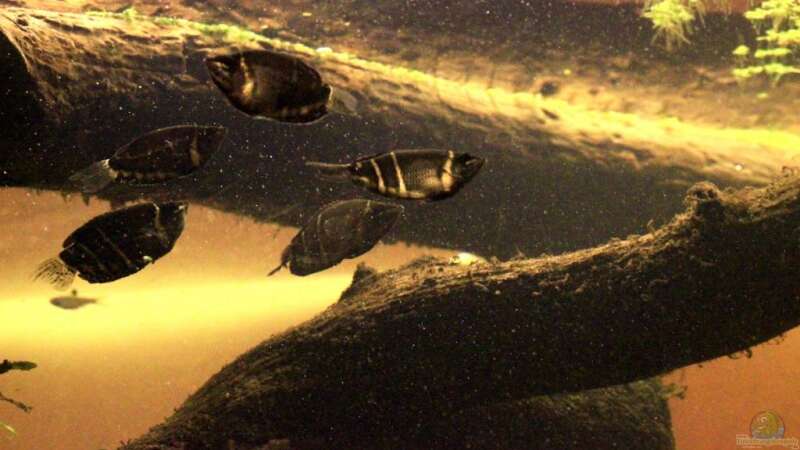 Rear and side walls covered with brown cardboard

Objective: The wood has a major role in the chemistry of this aquarium. The wood is harvested from a continental Mediterranean climax forest of holm oaks. The tannins were diluted in the aquarium water to recreate the atmosphere of ecosystems of black water streams and rivers associated with ancient peat swamps forest of Asia.

The Arlite in the lower layer has the function of providing good water circulation, with a good oxygenation to prevent the creation of anaerobic areas. Its high porosity should allow the settling of good bacterial colony. This first layer has practically no cation exchange capacity, its pH is close to neutral, and has no influence on the kH. The peat, which has a pH of 4-4.5 furnish humic acid into the water and acidify the aquarium, mixing with aqualid allows us to incorporate trace elements, and also increases the aeration of the peat. Finally Akadama the third layer, is a slightly acidic clay pH 6, 7-7, has a high cation exchange capacity and to prevent caking we will add a small proportion of inert volcanic rock.

- Quercus ilex ssp ballota wood: strains and roots (aprox 40 kg). It is a high density wood, 0.87 t / m3 of anhydrous density. Its wood and bark is rich in soluble tannins, it has been the main source of tannins for leather industry in the Mediterranean area for centuries. In the submerged parts the outermost crust was eliminated to prevent fungal contaminations. However in the emerged areas it was partially burned bark. Burnt bark of this species is a very good substrate for the growth of lichens.

To grow brine shrimp: a glass tube with a diffuser connected to an air compressor and dilution of common salt in water

We will have a water with a high tannin content. It is intended to be illuminate with a warm spectrum. .

With this spectrum we expect to get a well-lit surface of the aquarium, which is the most planted, and a deeper part with very low light intensity, considering that a warm spectrum is less able to penetrate the water column.

Other filter materials for occasional use: Carbon active,

Due to the high content of non cured wood, the tank have a considerable biological oxygen demand. The oxygen is consumed by the decomposition processes of wood through heterotrophic bacterial. This motivates the need for high aeration tank.

The use of two filters allow more versatility to use different filter materials, and can be cleaned alternatively, avoiding sudden changes in water chemistry. The xocolates gouramis are very sensitive to changes..

The chocolate gourami, Sphaerichthys osphromenoides, is a species of gourami native to the Malay Peninsula, Sumatra, and Borneo.

They are restricted to peat habitats.

Such habitats have a very low mineral content, which results in an extremely low pH, sometimes below 4.0. The water is very soft, and usually dark from decayed organic material. Chocolate Gouramis are very sensitive to water conditions. Nitrates, nitrites and phosphates must be kept as low as possible. Without optimum water conditions, they are susceptible to bacterial infections and skin parasites . For this reason this specie was formerly used as a bioindicator in disc fish aquariums. Chocolate gouramis don't like large water changes, so smaller more frequent water changes should be carried out. With low pH and low hardness the aquarium will be more prone to the pH crashing, to prevent this the KH should be monitored daily and adjusted as necessary to maintain the pH.

We will keep it safe with an intense biological filtering, combined with zeolites to keep down nitrates. It is a mouthbrooder and therefore is well suited to moderate water flows.

Though not gregarious in the sense of schooling/ fishes it does seem to require interaction with conspecifics and displays more interesting behaviour when maintained in numbers, meaning we recommend the purchase of no less than 6 individuals. In small groups reproductive males enter in interspecific competition and increases their aggressiveness.

This species is amouthbrooder. Lays 20-40 eggs. Female incubates eggs in mouth for 2 weeks.

They are omnivorous, but feed primarily on insects-

A stenotypic inhabitant of peat swamp forests and associated blackwater streams, In unaltered habitats the dense canopy of branches above means very little light penetrates the surface of such environments, and riparian vegetation also tends to grow thickly.

The water is typically stained darkly with humic acids and other chemicals released by decaying organic materials, the dissolved mineral content generally negligible and pH as low as 3.0 or 4.0.

All Parosphromenus spp. require acidic conditions with negligible carbonate hardness and very low general hardness so a reverse osmosis unit or other method of obtaining soft water may need to be employed, and this can be further acidified using phosphoric acid or similar if necessary.

This species is chiefly a micropredator feeding on tiny aquatic invertebrates, therefore in the aquarium it must be offered a variety of small live foods such as Artemia nauplii, Daphnia, Moina, mosquito larvae, micro worm, etc. Frozen foods are sometimes accepted but not considered sufficiently-nutritious while the majority of dried products are normally refused.

Normally spawns in small caves or among leaf litter and forms temporary pair bonds with the male solely responsible for egg and brood-care. Parosphromenus spp. have been grouped arbitrarily based on courtship behaviour in males which adopt a ‘head-down’, ‘head-up’, or ‘horizontal’ position depending on species.

Described from ‘Gunung Sahilan and Deli, Sumatra, Indonesia’ but currently considered native to Peninsular Malaysia, Singapore, and the Greater Sunda Islands of Borneo and Sumatra. According to many sources it’s also found in Thailand and Cambodia although definitive occurence records from either country are lacking. In Peninsular Malaysia it’s widely-distributed and has been collected in the states of Perak, Terengganu, Pahang, and Johor.

Primarily inhabits black water streams and rivers associated with ancient forest peat swamps in which the water that is typically stained dark brown by humic acids and other chemicals released from decaying organic material.

Micropredator feeding on small insects, worms, crustaceans and other zooplankton. In the aquarium it’s easily-fed but the best condition and colours offer regular meals of small live and frozen foods such as bloodworm, Daphnia, and Artemia, alongside good quality dried flakes and granules.

It’s a schooling species by nature and the purchase of at least 8-10 specimens is recommended.

They are an egg scatterer, and if provided with a mop or sufficient moss or plants, they can lay eggs

Native to southern Thailand, Peninsular Malaysia and the Greater Sunda islands of Borneo and Sumatra.

Mostly inhabits gently flowing black water streams and rivers associated with ancient forest peat swamps. The water is stained brown due to the release of tannins and other chemicals released by decomposing organic matter and the substrate scattered with fallen leaves, twigs and branches.

It also makes an ideal companion for anabantoids such as Sphaerichthys or the more diminutive Betta species.

It’s a schooling fish by nature and should be kept in a group of at least 8-10 specimens.

It is a micropredator feeding on small insects, worms, crustaceans and other zooplankton. In the aquarium it will accept dried foods of a suitable size but should ideally should be offered daily meals of small live and frozen fare such as Daphnia, Artemia and suchlike.

Like many small cyprinids this species is an egg-scattering, continuous spawner that exhibits no parental care.

Currently two changes per week of 10 liters of water. I am currently making changes with 80% water RO. I use as additives touromin or alternatively, a tea of alder cones, plus I add a small amount of oil of Melaleuca, ferropol, potassium nitrate and potassium sulfate at very low doses.Lately I do not fertilized with phosphates

It is alternatively complemented by addition of:

- Live: Brine shrimp, besides the infusoria that grow on wood and moss aquarium and snails Planorbis

Reduction of 30% of the wood uncured

Successive cleaning of pipes with H2O2

To celebrate it I accidentally deleted all text description aquarium, including all updates:

In short and so far:

Wood is introduced with treatment prior to debarking and a week of immersion. Treatments against fungi and bacteria are carried into the aquarium, prior to the introduction of fish

Because of that, the aquarium had many problems of high BOD. As data, after 24 hours of cleaning filters, the oxygen content is falling to 4ppm, less than half the your value of saturation.

Under these conditions, the guramis adapted perfectly, but rasboras were dying from asphyxiation. This required daily maintenance of the filters, which caused much instability in the aquarium,

Fortunately with time, patience and the changes described finally this problem could be corrected

16/4/2015 Melaleuca oils have helped reduce the amount of anaerobic bacteria and in low doses are liked by guramis. Now I'm very happy with the aquarium, after much effort we seem to have located in the fine line of balance. The first filamentous green algae begin to grow. I did not bothers in to wood, but do not want me to grow in mosses and ferns. I suspect that the ratio N / P is unbalanced. ( The levels remain low to defining this ratio with analytical.) I put phosguard seachem into the filter. I reject the use of glutaraldehyde and upload nitrates for not affect the guramis, Here, less is more!!

Planorbis snails population is very high, and filamentous algae could be associated with a rise in the level of ammonia caused by decaying snails.

I put snails Anentome helena to control the Planorbis population.

However, I believe that the females do not complete the entire incubation process.

20/06/2015 Breviboras, have adapted very well, but Parosphromenus is very shy, I decrease the intensity of light until 3450 LM

07/08/2015 I incorporate corrections in the description of the aquarium and I add new images.

24/08/2015 I removed all the emerged part, to raise the height of the water column and increase the capacity of the aquarium. With the additional water, I increased the size of the population of Breviboras, and I have introduced 14 specimens of Trigonopoma pauciperforatum [/ b].

I saw a black spots on the skin of chocolates gouramis and parosphromenus. You can observe them in the last image of the gouramis. "Black-Spot-Disease" ????. A female of Gurami is dead. I'll medicate.

23/10/2015 The symptoms have subsided. Initial treatment with metronidazole and multicure of Djana, after Zipyran Plus (praziquantel + febantel + pyrantel). I want to thank Torsten (Aquarientechniker), who has helped me to identify potential pathogens.

I really like this tank! It looks phantastic, a viewy and harmonious composition.

Beautiful Nature Tank, like the Set up and the Species.

WOW What a amazing tank! congratulation! You have made your tank very natural. When i look on your pictures i think, i see a natural river, Very well!

I hope you can enjoy the tank for a long time!

what a fantastic, great Biotop. The best Asia-Scape from EB.

Best regards from the Wedemark 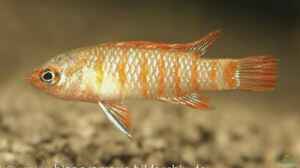 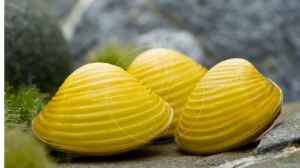 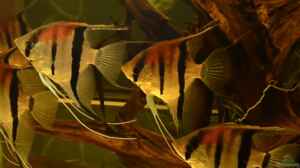